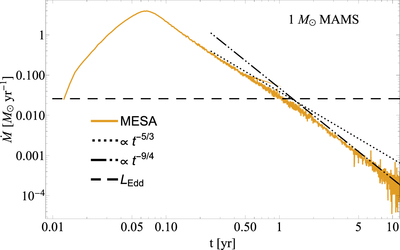 Fallback rate from the 1 M⊙, MAMS MESA progenitor, in units of Solar masses per year as a function of time in years, run out to 10 yr post-disruption. The dotted line shows the scaling ∝ t−5/3 (predicted to be the asymptotic power law followed by the fallback if there is no surviving core), the dotted–dotted–dashed line gives the scaling ∝ t−9/4 (predicted by Coughlin & Nixon 2019 to be the asymptotic power-law decline of the fallback if there is a surviving core), and the long-dashed line gives the Eddington luminosity of the hole if the radiative efficiency is 10% and the opacity is set to the electron-scattering opacity of 0.34 cm2 g−1. Here the stream possesses a gravitationally bound core (with a mass of ∼15% of the progenitor star) at the location of the marginally bound radius that reforms out of the stream after the star is initially completely disrupted. We see that for roughly the first year after the return of the most bound debris there is little evidence of the existence of the core on the fallback, and the fallback curve appears to asymptote to a t−5/3 decline. However, around roughly 1 yr, there is a noticeable break in the falloff, and the curve steepens to a decline that is well matched by the power law ∝ t−9/4. 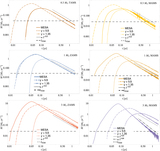