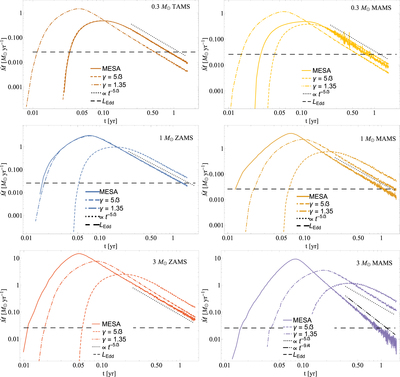 Fallback rate onto the 106M⊙ SMBH in units of Solar masses per year as a function of time in years. Here solid curves correspond to the density profiles generated from MESA, dashed curves are γ = 5/3 polytropes matched to the stellar mass and radius of the MESA star, and dotted–dashed curves are γ = 1.35 polytropes matched to the MESA star mass and radius; dotted black lines show the power-law ∝ t−5/3, while the dotted–dotted–dashed line in the bottom-right panel shows the scaling ∝ t−9/4. The long-dashed black line gives the Eddington luminosity of the BH, assuming a radiative efficiency of 10% and an electron-scattering opacity of 0.34 cm2 g−1. The specific star is shown by the name in the legend, and panels on the left side show the fallback from stars at ZAMS, while those on the right are more highly evolved. It is apparent from the top-left and middle-left panels that the fallback curves from the 0.3 M⊙, ZAMS and the 1 M⊙, ZAMS progenitors are very well-reproduced by γ = 5/3 and γ =  1.35 polytropes, respectively. Every other fallback curve from a MESA-generated density profile, however, shows significant deviations from the polytropic approximations. We also see that the 3.0 M⊙, MAMS follows ∝ t−9/4 at late times, which results from the presence of a bound core that survives the encounter (Coughlin & Nixon 2019; no bound core is left when the star is modeled as a polytrope). The 0.3 M⊙, MAMS MESA star also shows enhanced variability in the fallback rate, which arises from the fact that the stream—unlike the polytropic models for the same MESA star mass and radius—has fragmented vigorously into small-scale clumps.