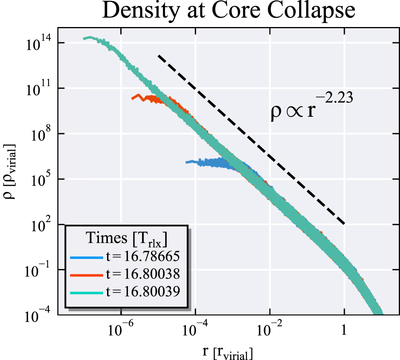 The density profile of the Plummer sphere with 108 particles near core collapse as a function of radius. Both quantities are calculated in terms of the initial virial radius and the initial density of objects within that radius. We show the densities from three separate snapshots, whose time is given in terms of the initial half-mass relaxation time. During the last moments of the cluster’s evolution, the inner regions rapidly converge to the ρ ∝ r−2.23 power law expected from Fokker–Planck calculations (Cohn 1980), showing self-similar behavior over more than 15 orders of magnitude in density.