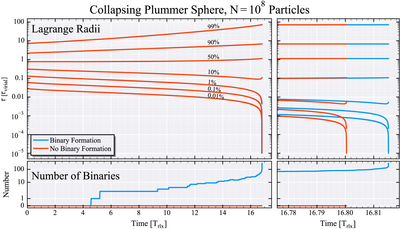 The Lagrange radii (radius enclosing a given fraction of the mass) and number of binaries as a function of the initial half-mass relaxation time for the two N = 108 particle realizations of a Plummer sphere. We show in red the model without three-body binary physics, and in blue the same model, but allowing binaries to form from single stars. On the top, we show the Lagrange radii as a function of time, with the distinction between the core and halo rapidly developed owing to two-body relaxation. On the top right, we zoom in at the final moments of core collapse (defined as having less than 1000 objects in the core) and clearly show the (minor) delay in core collapse caused by binary heating in the cluster core. On the bottom, we show the number of binaries formed over time. As the core shrinks, the central encounter rate increases, dramatically increasing the number of binaries in the cluster in the final moments before collapse.