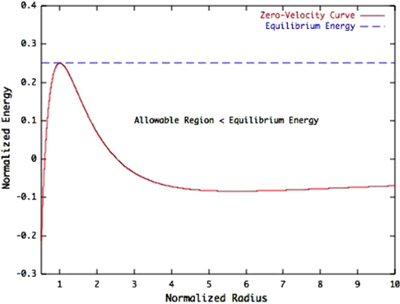 Diagram from Scheeres (2009) that depicts the energy of a second-order planar ellipsoid–ellipsoid binary as a function of the primary’s radius for a fixed angular momentum. The local maximum at a radius value near 1 is the unstable inner equilibrium. For a conservative system a binary initialized under these conditions must remain between the red zero-velocity curve and the blue energy line. Thus the binary can either collide left of the equilibrium or be chaotically captured right of the equilibrium with the potential to further separate and escape (Scheeres 2009).