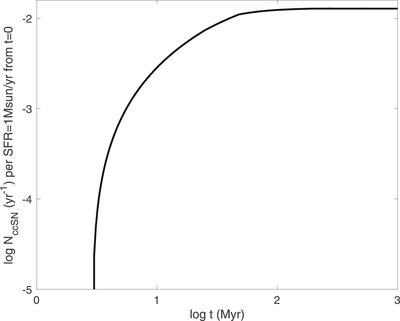 Supernova rate for a star formation event at an SFR of 1 ﹩\,{M}_{\odot }﹩ yr−1 starting at time t = 0 as a function of time. This plot is produced using Equation (A.2) of Zapartas et al. (2017) of the core-collapse supernova rate including both single stars and binary mergers. We note that at t ≥ 200 Myr the saturation rate corresponds to one supernova per 78 ﹩\,{M}_{\odot }﹩ of stars formed, approximately in agreement with what a Kroupa IMF gives.