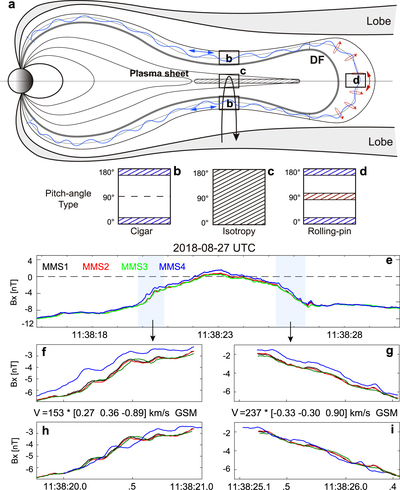 Characteristics of Electron Pitch-angle Distribution in the Flapping Magnetotail

Sketch of the first explanation and timing results. (a) The status of the newly dipolarized magnetotail. The black arrow shows the trajectory of spacecraft across the current sheet. The blue curve represents small-angle electrons, whose bouncing motion direction along the newly closed magnetic field lines is denoted by the blue bidirectional arrow. The blue dotted lines near the Earth represent the magnetic mirror points of small-angle electrons. The red cycles represent electrons at a quasi-perpendicular direction with the red bidirectional arrow denoting moving directions inside the magnetic bottle. The red dotted lines in the neck indicate the magnetic mirror points of electrons inside the bottle. ((b)–(d)) Electron PAD arising in different regions, corresponding to the areas marked by letters in Figure 3(a). (e) x-component of the magnetic field observed by four satellites. ((f)–(i)) Timing analysis of BX .