Left: some lines from a C2 band in the Sun synthesized by the four codes and synthesized by KORG using the prescriptions for the chemical equilibrium constant, ﹩{K}_{{{\rm{C}}}_{2}}﹩, from the other codes. Differences in these prescriptions, primarily arising from differences in the dissociation energy, D 0, drive most of the disagreement. Right: the ratio of ﹩{K}_{{{\rm{C}}}_{2}}﹩ values per Barklem & Collet (2016; KORG's adopted values) and per the treatment used by another code. The dashed lines show the values obtained using the Barklem & Collet (2016) data adjusted for the D 0 used by another code. Uncertainty in D 0 drives most of the disagreement in the amount of C 2 present at the photosphere and most of the disagreement in the synthesized spectra at these wavelengths. 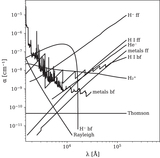 © 2023. The Author(s). Published by the American Astronomical Society.