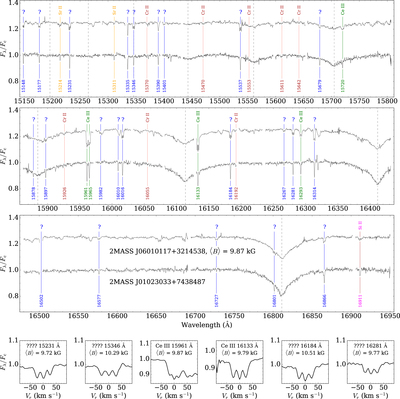 Top three rows: APOGEE spectra of 2MASS J06010117+3214538 and 2MASS J01023033+7438487, two stars exhibiting the unknown lines discussed in Section 4, with the lines being magnetically split for the former. Blue vertical lines indicate the unknown lines (for which the labels are the vacuum rest wavelengths in Å) and green lines indicate Ce III. A few other species in common between the two stars are labeled. Strong airglow lines have been masked from the spectra, including one that typically distorts the profile of the unknown line at 16502 Å. Bottom row: a closer view of magnetically split lines in the spectrum of 2MASS J06010117+3214538. The feature redward of Ce III 15961 Å is a blend of Si I 15964 Å and Ce III 15965 Å. The mean magnetic field modulus obtained from the measured splitting of each line is given.