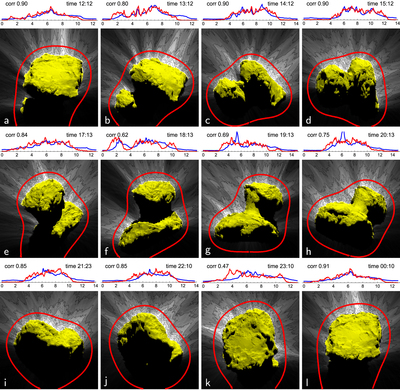 Dust column densities over a diurnal rotation period. This linear grayscale representation of the dust column density resulting from the homogeneous surface activity model across the entire sunlit nucleus, is normalized to the highest density within each panel. The yellow inset shows the illumination condition of the nucleus; the direction toward the Sun is pointing up. The viewpoints match Rosetta’s flight path and observations during 12 hr, starting on 12 April 2015, 12:12. The predicted dust column density in the top panels (red) is compared to the image intensity recorded by Rosetta OSIRIS/NAC (blue) along the marked annulus around the nucleus. The correlation coefficient (corr) of predicted dust column density and observed light intensity is given in the insets. 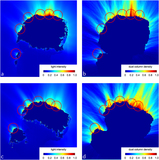