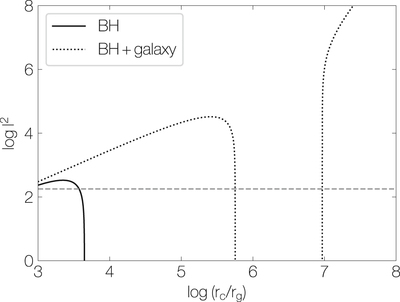 The square of angular momentum l2 as a function of the locus of the critical point rc at a specific Bernoulli parameter E. The solid curve corresponds to “hot_bh_t” (Table 1), which only includes the black hole potential, and the dotted curve corresponds to “hot_bhg_tb”, which includes the potential of the black hole and the galaxy. The horizontal dashed curve shows the angular momentum l2 adopted in “hot_bh_t” and “hot_bhg_tb” for easy inspection. The intersections with the dashed curve reveal the loci of critical points.