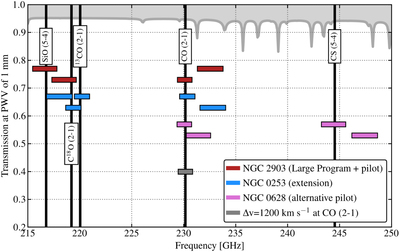 PHANGS–ALMA spectral setup. Colored horizontal bars show the spectral windows observed using ALMA’s Band 6 receiver. The top, red bars show the setup for Large Program, the follow-up completion programs, and the two main pilot surveys (see Table 2 for details). This covers CO(2−1), C18O(2–1), and allocates the remaining bandwidth to continuum; though we mark SiO(5–4), it is generally too faint to be detected by our observations. Added flexibility for programs started from Cycle 6 onwards allowed us to also observe 13CO(2−1) during some extensions to the project, as shown in the middle, blue bars. Pink bars show an alternative setup used for early pilot observations of NGC 0628. In this case we observe the high critical density line CS(5–4) instead of the rare isotopologue C18O(2–1). The gray shaded region at the top of the figure indicates the transmission of the atmosphere at a typical precipitable water vapor (PWV) level of 1 mm. Solid black lines indicate the Doppler-shifted frequency of observed spectral lines at a typical recessional velocity of vLSR = 500 km s−1. 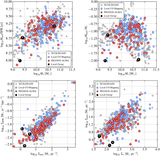 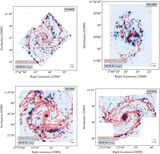 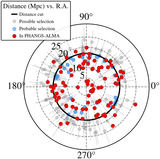 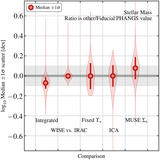