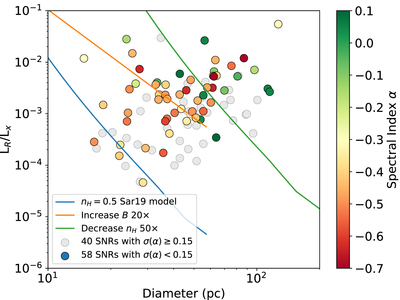 The ratio of the radio luminosity νLν at 1.4 GHz to the X-ray luminosity as a function of diameter D for SNRs in M33. The Sarbadhicary et al. (2017, 2019) radio luminosity model predicts that in the adiabatic expansion (Sedov) phase. This ratio should decline rapidly with the diameter. The blue line is for nominal model parameters with nH = 0.5 cm−3. The SNR shock reaches the radiative phase, which effectively terminates both radio and X-ray emission, at the radius where the line stops. While the model predictions depend on the ISM density and magnetic field, even changes by a factor of 20 in B (red line) and 50 in nH (green line) do not affect the conclusion that the observed variation of LR/Lx with diameter is much flatter than the predictions. (Lower density does at least allow SNRs to reach larger radii before they enter the radiative phase.) The SNRs that have well-determined spectral indices have symbols color-coded by α; objects that are too faint to have an accurate α (including those in regions that lack 5 GHz data) are shown in gray.