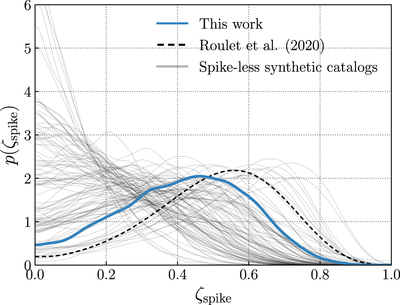 Marginalized posterior on the fraction ζ spike of binary black holes comprising a distinct subpopulation with χ eff = 0. The blue curve shows the results obtained through analysis of the binary black holes in GWTC-3 (Abbott et al. 2021d). We find ζ spike to be consistent with zero, indicating no evidence for an excess of zero-spin systems. Nevertheless, p(ζ spike) peaks suggestively at ζ spike ≈ 0.5. We demonstrate that this is not unexpected by repeatedly generating and analyzing mock catalogs of χ eff measurements, drawn from an intrinsically spikeless population described by a simple Gaussian. These catalogs yield posteriors similar to our own, often (and incorrectly) disfavoring ζ spike = 0. As discussed in the main text, this behavior is due to a degeneracy between ζ spike and the inferred mean of the spinning “bulk” population. For reference, the black dashed line shows the posterior on the zero-spin fraction ζ 0 inferred in Roulet et al. (2021), which is qualitatively consistent with both our GWTC-3 measurement and the simulated spikeless measurements. 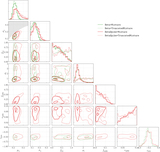