Mass loss (black) and its first derivative (DTG: red) curves of Jbilet Winselwan (A) and Murchison (B). The DTG curves can be used to identify the host minerals of the observed volatile loss. Based on the DTG curves of CMs, Garenne et al. (2014) divided the entire volatile loss into four parts: the first part (0°C–200°C) for absorbed and mesopore H2O, the second part (200°C–400°C) for H2O from hydroxides, the third part (400°C–770°C) for H2O from phyllosilicates, and the last part (770°C–900°C) for CO2 from carbonates with possible contributions from sulfates. Jbilet Winselwan shows a smaller volatile loss than Murchison in total, and in particular, between 200°C and 400°C, suggesting the volatile loss on its parent body due to thermal metamorphism. 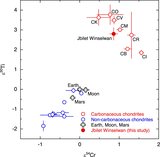 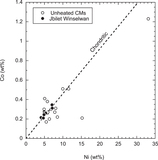