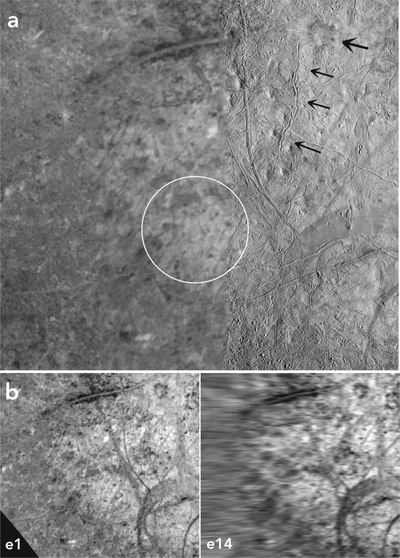 (a) Mosaic of putative E12 plume site, highlighting lack of unusual photometric features. The circle is 125 km wide and centered on the nominal plume location (Jia et al. 2018). Small arrows indicate geologically recent fractures, none of which display distinctive albedo features; the large arrow indicates the 23 km-wide Manannan crater (outer rim coincident with dark ring). Imaging in the left half was acquired at 1.4–1.6 km pixel−1 in 1996 and 1998 a few months before and after the E12 detection; there is sharper 0.23 km pixel−1 imaging at right in 1998. (b) Comparison of map-projected GLL images acquired before (e1) and after (e14) the GLL e12 plume observations, revealing no distinctive surface patterns or changes. 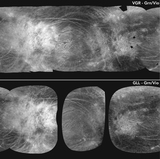