XMM and NuSTAR Observations of an Optically Quiescent Quasar 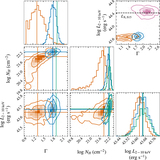