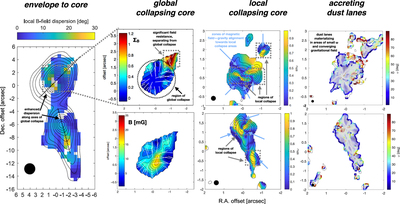 Overview of diagnostic tools in the W51 e2/e8 region. From left to right: on the envelope-to-core scale the local magnetic field dispersion can pick out the location and direction where a global collapse will start to happen (zones with larger dispersion values); on the global-collapsing-core scale, the small values of the magnetic field tension-to-gravity force ratio Σ B across the core indicate that e2 as an entity can globally collapse (upper panel), and the measured magnetic field strength map reveals a clearly growing strength toward the center (lower panel); on the local-collapsing-core scale, the ﹩\sin \omega ﹩ measure locates regions where gravity is unobstructed (small values) and where the B-field can maximally slow down gravity (values close to one) toward locally collapsing smaller cores; on the accreting-dust-lane scale (rightmost panels), ridges formed by the locally converging gravitational field (gray arrows) appear in areas labeled as dust lanes in Figures 1 and 2, which typically also coincide with small angles ω (color scale). Low ﹩\sin \omega ﹩ values on the local-collapsing-core scale are signposts of the appearance of dust lanes at higher resolutions. Panels in the first three columns are adapted from Koch et al. (2012a, 2018).