Left: infrared luminosity (integrated between 8 and 1000 μm) vs. star formation rate for the 1000 most massive galaxies at redshift z = 2 in the SIMBA M25N512 cosmological simulation. The solid line shows the Murphy et al. (2011) SFR–LIR relation as compiled in Kennicutt & Evans (2012). Below SFRs ≲ 1 M⊙ yr−1, a lack of dust in galaxies drives a precipitous drop in the infrared luminosity with respect to SFR. Right: the impact of an AGN on the LIR–SFR relationship in galaxies. Histograms show the ratio of the synthetic “observed” infrared luminosity to what one would expect from the Murphy et al. (2011) relationship, given the model galaxy’s SFR. As is clear, the AGN drives excess power toward high luminosities, which may result in overestimates of the SFR using a canonical LIR–SFR relation for some galaxies. 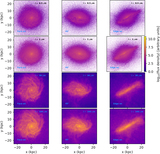