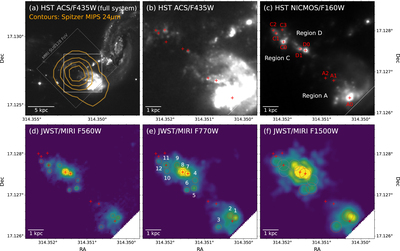 Multiband imaging of IIZw096. (a) HST/Advanced Camera for Surveys (ACS) F435W (0.4 μm) image showing the entire IIZw096 system with Spitzer/MIPS 24 μm contours in orange. The FOV of the JWST/MIRI SUB128 subarray is centered on the dust-obscured region (gray dotted box). The white box indicates the region presented in the rest of the panels. (b) A zoomed-in image of panel (a) showing the obscured region. The red plus symbols are a subset of the sources identified by Wu et al. (2022). (c) HST/NICMOS F160W (1.6 μm) image of the obscured region. The region and source names from Goldader et al. (1997) and Wu et al. (2022), respectively, are shown. (d)–(f) JWST/MIRI SUB128 images taken with the F560W (5.6 μm), F770W (7.7 μm), and F1500W (15 μm) filters. The MIRI images are shown with a logarithmic scale. The red circles indicate the locations of the detected sources with a size corresponding to the beam FWHM. Gray circles indicate sources detected in F560W and F770W but not confidently detected at F1500W. The red plus symbols are the sources detected with HST as shown in panels (b) and (c). PSF features are visible extending outwards from ID 8 in panel (f) because it is compact and bright. All images are shown with north up and east to the left. These images show that while the complexity of IIZw096 was evident from the near-IR HST data, the true nature of the dust emission and the source of the power is only finally revealed with JWST.