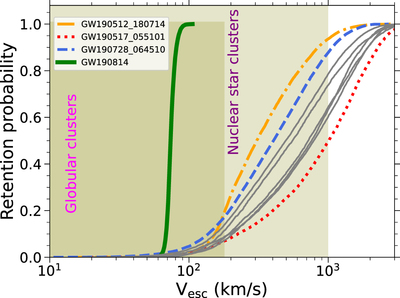 Retention probability of a few representative GWTC-2 events as a function of the cluster escape speed (thick curves, listed in the legend). The gray curves correspond to five of the six events reported by Kimball et al. (2021) to be of hierarchical origin (the sixth one is the red dotted curve; see Section 2.3 for discussion). The retention probability is computed directly from the kick CDF (Figure 1) as discussed in the text. The shaded regions show the range of escape speeds for globular clusters and nuclear star clusters (Antonini & Rasio 2016). For example, a nuclear star cluster with escape speed ∼500 km s−1 can retain GW190512_180714-like systems with probability ∼0.70, while a globular cluster with escape speed ∼74 km s−1 can retain a GW190814-like system with probability ∼0.50. Higher retention probability increases the likelihood that merger remnants can participate in subsequent BBH mergers within the cluster.