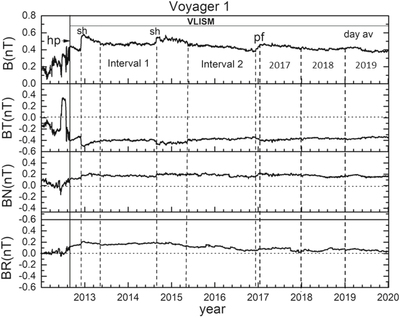 Daily averages of the magnetic field strength B(a) and its components BR(d), BT (c), and BN(e) in the VLISM beyond the heliopause (HP). This Letter discusses intermittency in the observations made between 2013 and 2020, except the disturbed intervals behind the two shocks and just behind the heliopause. Kolmogorov turbulence was observed during Interval 1 and Interval 2. The interval during 2017 behind the pressure front labeled “pf” as well as the observations during 2018 in 2019 were also considered.