Initial (left) and final (right) states of model M1. The small bodies start with perfectly circular orbits, and end with overlapped eccentric orbits, despite the fact that direct gravitational interactions among the particles are suppressed. A total of 990 of the small bodies and their orbits are displayed in light gray, and 10 in black with orbits whose eccentricities evolve above the 99th percentile in the final stage. For the purposes of this example, the integration time was extended to ∼0.8 Myr, to better illustrate the effect of self-stirring. 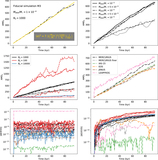