AGA simultaneous fit of components DoAr21c and DoAr21B. Left, top panels: parallax of the source after removing proper motions and the solution of the orbit of DoAr21c and DoAr21B. Next two panels: Orbital solution for DoAr21c after removing the proper motions and the parallax of the source, and removing the contribution of component DoAr21B. The last two panels show the orbital solutions for DoAr21B after removing the parallax, the proper motions and the orbital motions of DoAr21c. The black dots correspond to the observed astrometric data with their error bars. The red crosses indicate the expected position at the observed epochs. The orbital solutions are shown as function of the orbital phase of each companion. The R.A. and decl. offsets are relative to the estimated barycenter position of the source. Right: the solid lines show the estimated orbit of these two companions. This figure shows that the inclination angle of both companions is quite different. DoAr21B has an inclination angle close to 90°, while DoAr21c has an inclination angle larger that 90°. The black dots indicate the position of the companion detected with the VLBA. The error bars of these data points are smaller than the size of the dot. None of the detections coincides with the estimated orbit of a companion. 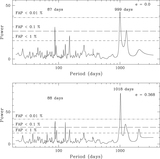 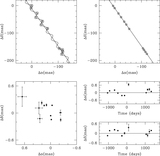 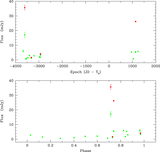