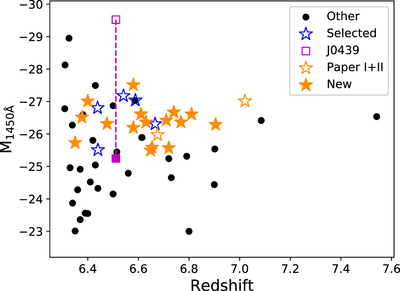 Redshift and absolute magnitude distribution of z ≥ 6.3 quasars. The black circles denote previously known quasars missed by our selection because of their faintness, being outside our searching footprint or at relative low redshift and therefore not satisfying our dropout selection. The two known z > 7 quasars are also not selected by us because they are undetected by the PS1 survey. The blue open stars represent previously known quasars that satisfy our selection procedures, and the orange open stars denote two quasars published in our Papers I and II. The filled stars denote our newly discovered quasars reported in this paper. The magenta squares denote the most distant gravitationally lensed quasar, J0439+1634 at z = 6.511, before (open) and after (solid) lensing correction (Fan et al. 2019). 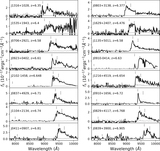