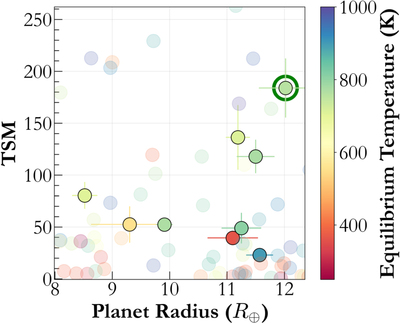 TSM of TOI-3757 b (circled in green) as a function of the planetary radius, alongside other M dwarf Saturn- and Jupiter-type planets (R p > 6 R ⊕; colored by the equilibrium temperature). Similar planets around FGK hosts with equilibrium temperatures <1000 K are shown in the background. TOI-3757 b has the highest TSM among M dwarf gas giants (R p > 6 R ⊕) with mass measurements, making it a lucrative target for atmospheric characterization, as discussed in Section 5.2.