Comparison to other well-characterized warm Jupiters. Left: period–eccentricity plot of transiting exoplanets with periods of 1–100 days and measured eccentricity from the TEPCat catalog (Southworth 2011). Marker sizes scale with planet mass. With e=0.58, TIC 237913194b occupies the 98th percentile in this population and contributes to a sparse sample of planets with very high eccentricities.   Right: mass–radius diagram of warm (﹩P=10\mbox{--}100\,\mathrm{days}﹩) planets from the same catalog. The color of the markers represent the equilibrium temperatures of the planets, and dashed gray lines are isodensity curves of 0.3, 3, and 30 g cm−3, respectively. The solid blue line marks the predicted mass–radius relation for giant planets with a 10 ﹩{M}_{\oplus }﹩ core (Fortney et al. 2007). TIC 237913194b lies very close to this line. The error bars for its mass are too small to be seen. 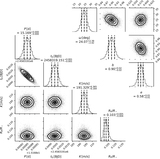 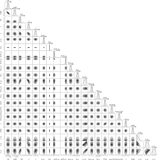